“A ship is safe in the harbor, but that’s not what ships are for.”

Well after almost a year (10 months and 23 days to be quite exact) after Redemption, then “Serendipity”, was delivered to the marina she’s back in her natural habitat! It feels like such a long time but it was needed and necessary for a few reasons. First, the previous owner was not able to properly maintain the boat due to health and age, so the boat sat for at least 12 years since last use and/or bottom job. This meant that the old bottom coatings were either non-existent or the very least compromised. In order to bring the bottom back to life, the hull was sanded down to the gelcoat to “dry out” for several months. Second, due to no one visiting the boat for such a long time, all the seacocks valves(valves) were seized. Heck, one was so badly corroded and eaten up with electrolysis it was literally weeping water thru the bronze fitting! So all fittings and seacocks were replaced. Last, the topside gelcoat was in such poor shape and cracking, the hull was sanded down smooth so new primer and paint could be applied. Lastly, the old Volkswagen Pathfinder 75hp diesel engine was pulled and a new Yanmar 4JH4-TE 75hp turbo was installed. Now for a brief summary of just what went down during the operation to bring her from what she was to what she is. After the bottom was sanded down, the thru hulls and seacocks were the first to be changed. The old thru hulls were recessed flush, so the new fittings were fitted in the old sockets and then filled smooth with a fiberglass filler in order to keep the hull as smooth as possible.

Next, the old engine was pulled out and a complete renewing of the engine room space was completed (more on that in another post). The cutless bearing was replaced, old transducer thru hulls were filled and glassed, a new Maretron DST-110 was installed in the bow just forward of the keel. Come to find out my hull is about two inches thick there of solid glass, stout! A basic Standard Horizon DS35 depth sounder was installed in one of the old transducer holes for a low power consumption unit and because I had one laying around. The topsides were sanded, primed and painted with Awlgrip products in a Aqua Mist color which is a light green but changes color depending on light and angle. Really sharp! Once the hull was dried for a several months, the barrier coat was applied, the the copper loaded epoxy was applied shortly after that so it would properly adhere. You can read more about that here. The Yanmar engine was installed after an extensive motor mount debacle or getting them right. 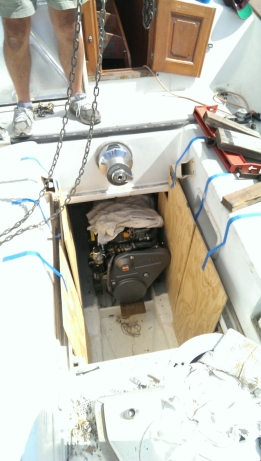 New 1.5″ shaft and a new-used wheel was fitted with new zincs. And the name was applied to the stern. Also, a new stainless 3″ exhaust thru hull was added since the Pathfinder was a 2.5″. Before I had she splashed, I washed and waxed the topsides with Starbright marine polish with Teflon.the stuff works great. Goes on easy, wipes off easy, no need for a buffer. You only need to take Mr. Miagi’s advice,”wax on, wax off.” It lasts quite a few months too, I use it on my truck and water beads on it 6-7 months later. My father stood behind the stuff when he owned/operated a marina & boatyard for seemingly forever. I joke with him asking how hard it was putting the Ark in the water for Noah… Love that man.

Finally, after all this, it was time to see if she still wanted to float. It was a joyous and exciting moment watching the travel lift slowly bring her to the water! I took a little video of her journey from the stands to the slip… 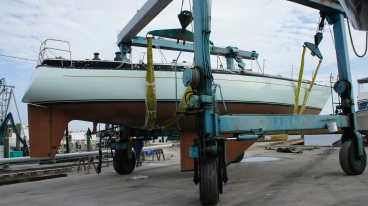 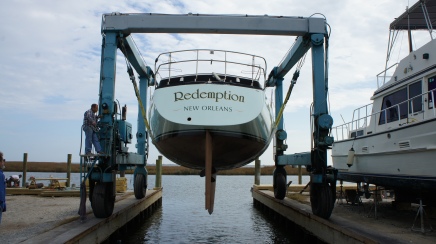 I boarded while the boat was still in the slings but floating on her own to check for leaks, weeps, or flowing water. Save for the hose fitting for the shaft seal everything was leak free. We left the boat in the slip overnight because in a day the mast would be stepped and then she could be moved to her slip.