When you have a mast that is almost 70 feet long, weighs hundreds of pounds, and you probably can’t afford a new one… You tend to get a little nervous when it comes time to stand it up and step it to the boat! But lets not get ahead ourselves here, more on that later. There was a lot of work and planning to get to that stage in bringing Redemption mast back to a condition of safe and reliable service.

Since it is a sailboat, I’ll start off with the important things: the halyards. After all, without them there would be no way to bring up the sails to actually become a sailboat. The old halyards were made up of wire to polyester double braid. This back in the day when modern low stretch cordage was either nonexistent or was extremely expensive wire to rope was the best solution to keep the sails tight and hold their shape. Well being the modern age, I replaced these old and tired lines because the rope was in bad shape, the wires had fish hooks along them, and because modern line was stronger, lighter, and easier on the hands.

I chose New England Ropes Endura Braid Euro style line for all the halyards, that being the main, genoa, staysail, and spinnaker. I chose this line because of its strength and price. It’s a dyneema core with polyester cover double braid line with a breaking strength of 14,900 lbs, twice as much as the original 1.4″ wire cable for more than half the weight. I ordered from Layline and had them do the splices with the different shackles for each halyard. Their service and price were competitive, and the guys on the phone were very helpful in helping me decide what I needed. Since I would be changing from wire to all rope, I needed to change out the old sheaves at the top of the mast and near the deck where the halyards exit the mast. I wanted something better than the original derlin sheaves so I ordered some sheaves from Garhauer Marine. Their sheaves are made up of aluminum and have derlin bearings with a stainless steel sleeve to ride on the axle. Much, much smoother and it makes a huge difference when hauling up or dropping sails.

From there, I added a crane to the top of the masthead to mount the wind sensor forward of the jib luff to help it read cleaner air.

I made the mistake of going against the old adage, “if it ain’t broke, don’t fix it” and decided I would try to get my spreader bars freshened up by getting them re-anodized. What a mistake! So I sent them to a commercial coating place in town that did anodizing. Well the ended up having to blast the spreaders to prep them. No big deal, for the small problem that they used SAND in lieu of something less aggressive on the soft aluminum! So I got from smooth matte, almost shiny surface to something closer to a pumice stone.. Doh! Worse, I had them do my mast-head top, mast deck ring, and spreader ends. I was not happy when I picked them up. 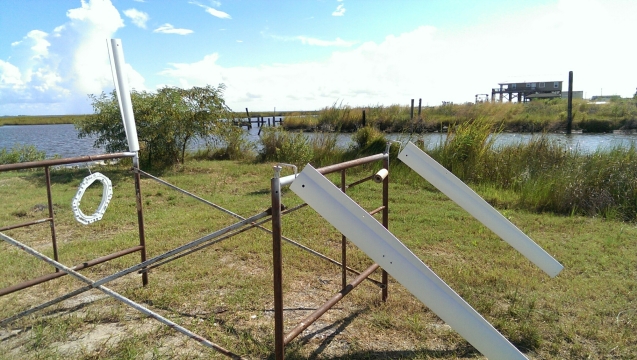 Not wanting to buy new parts, I went to plan B. I took my Awlgrip primer, which is a heavy build, sprayed them as good as I could to get them semi smooth again. Following the primer, I painted them with some black International 990 two-part paint.   What a mess, but it was fixed and I’ll live with it. On a lighter note, the black looks really nice on the bare aluminum mast. Wiring the mast wasn’t that bad, and it went pretty well. I did a little preventative maintenance while the mast was out as well. I hit some corrosion spots with a SS wire brush and then painted over them with Duralux Alumithane. This stuff is for steel and rust but it seals and gets extremely hard once cured on aluminum. I did the base of the mast where it appeared it had sat in water for some time and had water stains and some minor surface corrosion. (see photo above)

Next, I added some extra lights that weren’t there before(boat didn’t have sailing lights, not even a tricolor up top). Instead of a masthead tricolor sailing light, I went a step above and use the red over green sailing light prescribed in the Rules.(red over green, sailing machine)  For my light setup I used the following from top down:

All new wires for the exception of the anchor light which I used existing wire that was in good shape. The VHF antenna is a Gam SS-2 Stainless Steel Whip VHF Antenna. I had no problems mounting it antenna but I did fail to trim it from 40″ to 35″ (the “ideal” VHF antennae length)… Whoops! Haha! Well, I’ll have to trim it one day when I go to the top of the mast. And lastly, literally at the last minute, I added a Davis Instruments windex to the aft end of the masthead(my racer friends scolded me for forgetting this).

It was that time, the time when we were to roll the crane over to the boat, rig up the shrouds and spreaders, and run the straps around the mast. I celebrated the long sailor tradition of putting penance at the base of the mast step. I had a Hong Kong 10 dollar coin and a Filipino 5 peso coin from my cruising there in the maritime academy. Roughly equal to $1.40 US. Typically you are supposed to put a gold dollar, but I didn’t have one and I thought this was neat and sufficient. Michelle dropped in a silver dollar coin, that was the last I could find in town. She dropped it in after the mast was up due to her being at work when it was stepped. It was go time and my nervous excitement wasn’t going to stop whatever good or bad was to come. So I said a prayer.. And prayed some more for the safe landing of the mast on this cold and rainy morning. 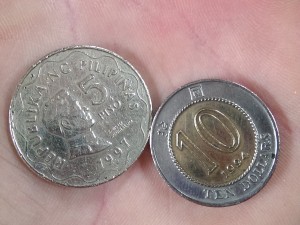 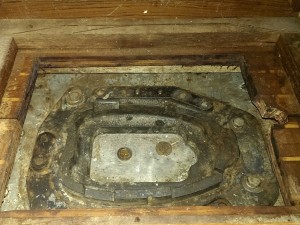 Once the penance was paid, the crane roared to life, straps were in position… Slowly the long aluminum pole became a tall powerful mast. Watching the mast being lifted was definitely nerve racking, this was my first time stepping a mast this long at the marina since I could remember. Seeing it flex in the middle ever so slightly made me want to look away; but I couldn’t! It was too exciting not to watch! Finally, it was upright, man was it tall! Things look so much shorter when they are on the ground from when they are standing up. My dad, who’s in the crane, now in complete control of the mast, now dangling like child from a father’s arms(see: joyfully helpless), started to swing towards the boat for its final resting place. Everything and everyone was in place.  My friends Byran,Michael, and Jackson came over to help us(Thanks a bunch again guys!). Michael was on deck giving direction and guiding the foot through the deck. Jackson and I were down below guiding it through the table and then pulling the wires out to keep from getting pinched between the mast and mast step. After some convincing, we got the tall mast to settle down back to its resting place.

Next, the stays were attached snug and the halyards were clipped to designated positions, tightened up snug to help back up the stays and keep them from slapping the mast. Other than the gaping hole where the mast went through the deck, everything was in great shape! Here’s a little time-lapse video I made during the whole dance routine, hope you enjoy!

It was finished, and it was good.