If you thought this was an educational medical article, this isn’t it my friend. I’m talking about changing the heart of Redemption, more specifically, the engine. Not to get philosophical on you, but without the engine many things would just not exist on our boat. We don’t plan to dock much when away so charging as of right now will be done solely by the alternator. Not only that, but eventually we plan to go north to the higher latitudes and we’ll need the engine to provide heat to the cabin and water. Let’s also not forget when in doldrums and “ghosting” (that is, sailing slowly and quietly in very light winds) isn’t overcoming the current, that iron genoa would be might nice to get things moving. The new turbo workhorse will provide life for all the systems that will be on Redemption. The new Yanmar will be the diesel pumping, electricity providing pulmonary machine we need. Not to mention having to move a 30,000lb vessel with a deep keel and an even taller rig. Could it be done without, sure it could! Do we want to do this, not a chance. I’ll pay for that little steel & aluminum luxury any day. Below is how the heart transplant procedure transpired…

First, let’s talk about what was once Redemption’s engine system. The engine compartment was quite a mess when I bought the boat, the engine was not working, and everything was dark and dank. The old fuel filter was leaking and protected by a large ziplock bag, wires were everywhere and were in such terrible condition as to not even be able to connect to a battery.

The original engine was quite an oddball to my father and I, in all his year’s owning a marina he had never seen one like it before. It was a 80s vintage Volkswagen 5 cylinder inline 70’ish’ horsepower diesel that was marinized by a company called Pathfinder. Upon further research, I found that this was the same engine that went into the old Volkswagen Rabbit work trucks in the 70s & 80s. The engine had its fuel injector lines removed and injectors loosened. The drive gear that was attached to it was an old Hurth HBW150V. The “V” designation means my boat is setup for v-drive, which means my engine actually faces backwards (drive gear in front of the engine) compared to a normal setup (gear behind the engine). When we finally pulled the hunter’s orange mass that was at one time considered an engine out, we realized this was a strange breed. 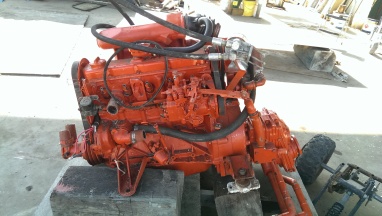 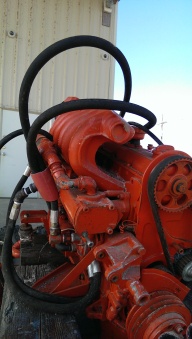 The engine lacks internal belts or chains to keep the cams, crank, and injector pump timed in sync, instead there was a series of cog belts. From that research, I found that this engine’s Achilles heel were those belts. If one belt failed everything went its own way, and that doesn’t work when things are contained within an engine. After further reading, examinations of the injector pump(missing pieces) and the removed injector lines and loose injectors and the lack of I came to the conclusion that this engine was not going back into Redemption. I would have to bite the bullet Civil War style and take the hit on a new fire-breathing, steel powerhouse. 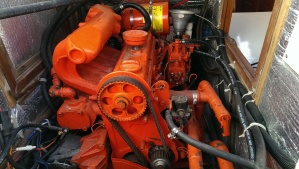 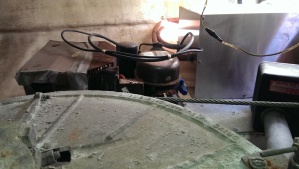 When I pulled the engine out I was looking at pure carnage, like someone attempting to trim a garden with a with a excavator (and yes I’ve see that..). There were more wires, insulation hanging, chipped paint, oil stains, dirt, and grime than ever. 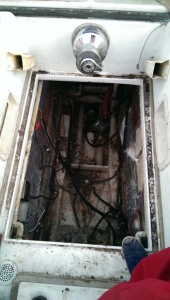 Not to mention in the aft part was spotted with mold, dull paint, sheets, lines, ropes of all sorts and sizes. Then there was the emergency tiller wrapped in a ragged and ripped down blanket (yes like the feather type….I know, I thought the same thing). So not only was there dirt and dust and wires everywhere but now it was as if the engine room was used for a chicken coop due to feathers scattered about! I took a deep long breath, after I got out of course, and assessed the situation and mentally planned my angle of attack. I started by removing everything in the engine room that wasn’t immediately attached to something. All the line, battery box, the tiller and some other bits and bobs that were all about. Then I removed the 110v refrigeration compressor(thing was heavy and massive!), the detached engine driven refrigeration compressor, the obsolete battery charger, and other items that were secured to bulkheads. The old stuffing box and hose, pssh! that was tossed out as well! This quote sums up the removal process quite nicely.

Now that I had some room to work, I started taking the old insulation down from the bulkheads adjacent to the engine. I removed everything that stopped progress, wasn’t necessary, or just looked at me the wrong way! I knew I was going to start from scratch and I didn’t need anything from the past slowing me down! 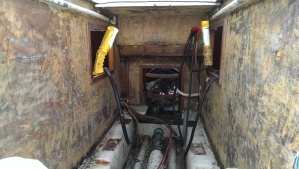 Times were a changin’ in that ER!(Engine or Emergency Room, you pick) Everything was wire-wheeled and/or sanded to further clean the surface and prep for paint. Once I got everything stripped and sanded, I vacuumed it all as well as I could, then brought out a deck brush and some strong degreaser/soap and went to town! This reminded me of when my mother used to hose me down with the garden hose when I came home with my buddy from mudding on the four-wheeler covered in mud from head to toe. If I could describe these two times together, it would be vigilance. No way was my mother going to let me stroll through the house covered in mud to go shower! I would have gotten slapped so hard, I would have thought it was the previous week! That was this engine room to me, I wasn’t about to redeem this engine space with new parts without first cleaning the foundation with everything I had! 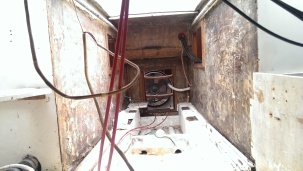 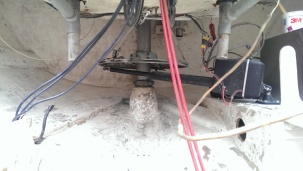 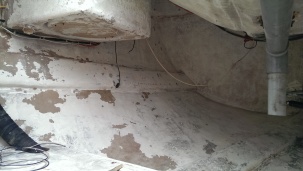 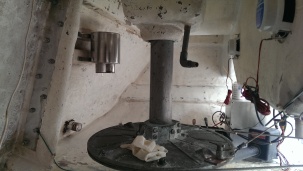 I succeeded in the cleaning, which was followed up by a fresh coat of white epoxy paint on the bilge floors and the walls and aft bulkheads were painted with leftover International 990 Matterhorn White. 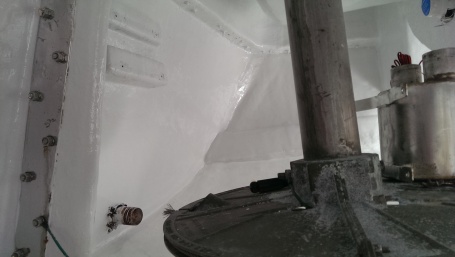 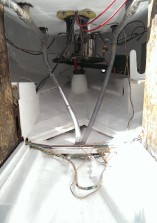 I took extra care and planning when it came to the actual engine space. I wanted a well insulated space that wouldn’t tear or fall apart a few years down the road. I first applied a water based coating called Silent Running SR 1000.

It had the consistency of pudding and was surprisingly super easy to apply. I put 5 coats on the interior bulkheads that faced the engine with one gallon . 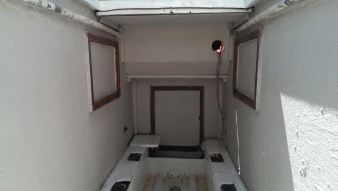 After that dried, I put soundproofing adhesive tiles that I got from SailorSolutions. These are one by one foot squares that have a peel and stick adhesive backing. Once the bulkheads were all lined, I covered all the seams with heavy duty aluminum ducting tape. Then the seams were covered with wood trim in a grid fashion that would help insist the panels are secured in the long run. 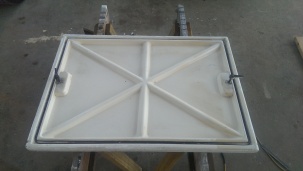 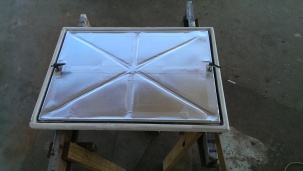 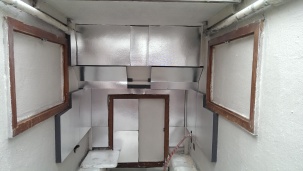 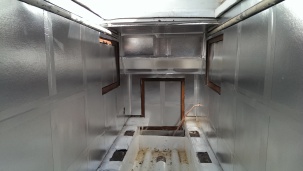 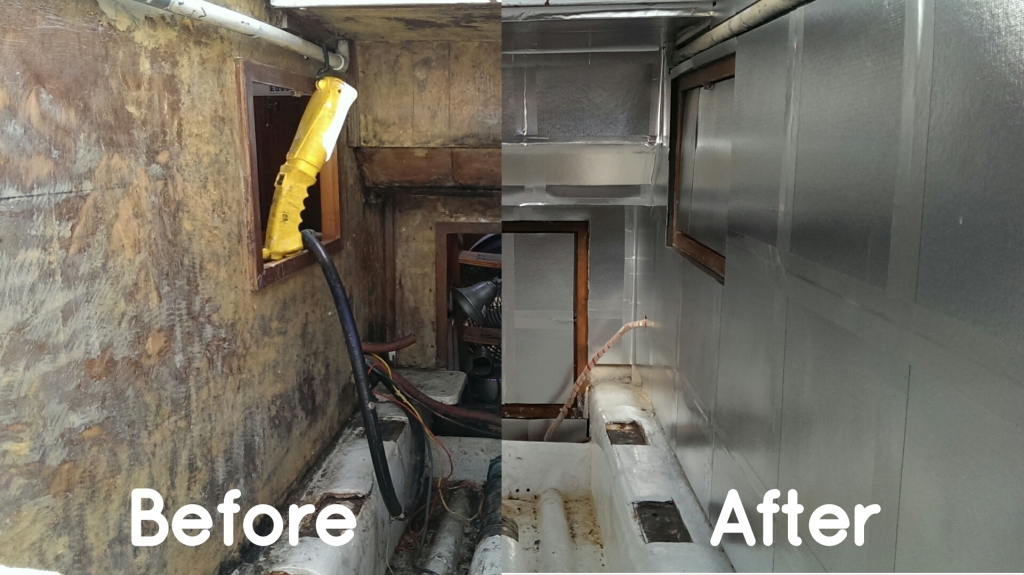 After sitting back in the back of the lazerette looking forward at the changes I was satisfied with how everything turned out (ripped out?). I knew that this part of the operation was finished and the engine room was ready for the new engine.

One thought on “A Heart Exchange: The Removal”