Last month Michelle and I were knocking out some small project waiting on things to come in the mail that were back-ordered for some future large projects we have coming up. We decided to tackle the plumbing system and get the freshwater, grey water, and black water systems operational so we can actually use the boat sinks/showers/ heads. We also, hooked up and powered up our freshly re-conditioned cold plate and new compressor system from Cruise RO Water. Well things were running very smoothly with running water and draining sinks, not to mention cold drinks and snacks in our reefer. Well that came to a screeching halt when we needed to cut some access holes under some drawers and the trash bin cabinet to run a pipe for the aft shower drain. At this point it had been about a week with the reefer running full time (not full time as in all the time but on an off). What we discovered was a wet, cold bilge area under the reefer and a even wetter, colder under sole wood that was the reefer bottom and a hose piece that was sticking out. The hose was there at one time to drain the reefer with the hole in the bottom, no big deal as most older designs have this for draining an ice box. The problem was this was I assume converted to a cold plate system at some point and that isn’t needed. The drain was fixed/modified at some time by replacing the original copper tube drain(that someone had drilled a hole through the bend to get it to drain better?) with a hose and pouring what I can only guess was some kind of marine tech type epoxy filler in the hole to surround it. The only reason I say it was poured in is because when I cut the access hole out there was a thick sheet of this filler that was hanging out in the bilge  between the stringers. What a mess dirty oily mess that was breaking it up and getting it out a 4 inch hole! 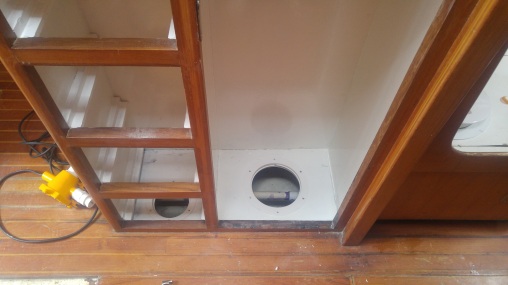 Running the pipe for the aft shower pump drain. This fortunately made us aware of the serious condenstation problem we were having with our reefer 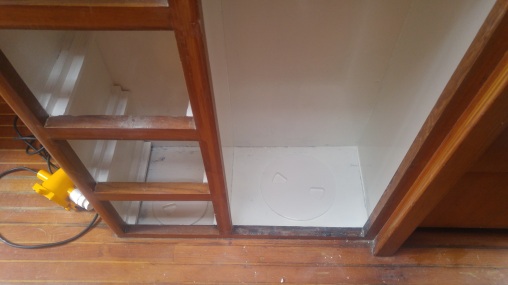 After the lids were screwed back on. The fresh paint makes it look new.

We decided we needed to address this drain situation so we cut the bottom of the reefer out to fix the drain hole for good: eliminating it all together. I cut a large rectangle out to be able to re-insulate after. Come to find out, again, that water was also coming from the screws that were securing the cold-plate up. We removed the cold plate, and cut another hole so we could get that wet foam out and glass the securing board instead of having screws condensate in the foam. While doing this we glassed the holes and wood where the old drain hole went. 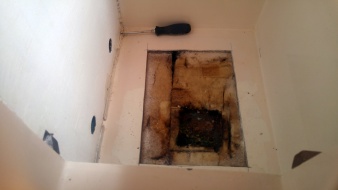 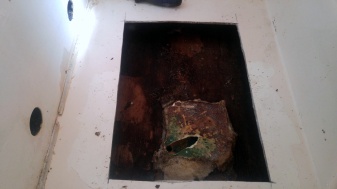 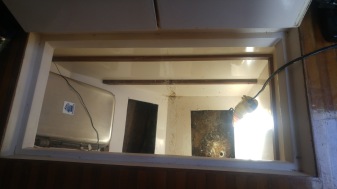 Where we started tackling this project

As we started our attempt at re-insulating with pink urethane board, we came to the realization that this Tetris-like game sucks and we were going to have massive gaps in our foam which is no good. Michelle and I discussed it over and we reluctantly decided to just rip out all of the old foam, it was open cell foam also, and get some spray in foam. We found out about the two part urethane closed cell foam from our fellow cruisers Matt and Jessica when they did their reefer refit on their previous boat, seen here. We ordered Handi-Flow Pour-in-Place foam from FastTool and they had great customer service when I called asking questions about it. This was the smallest one they have but we could have ordered the size up because we did run out right at the end, though we did have a huge space to fill between hull and freezer.

To do this required cutting more large squares out of the remaining walls of the reefer box. This will allow access for both getting the old foam out and spraying the new foam. Ripping the foam out was done by my very determined wife Michelle while I was doing other things(I promise it was important…whatever it was!).With all the old foam out and the spaces vacuumed and cleaned, we started our re-foam process. First we lined the outside with sheets of thin Reflectix insulation to help with radiant heat and to add “some” vacuum-like insulation with its sealed bubbles. Then we laid down Tyvek cloth to help keep moisture from going to and from the reefer and exterior.  After those two were taped in place with the Tyvek tape we also picked up(by the way, the adhesive they use smells really bad) we started the foam process. 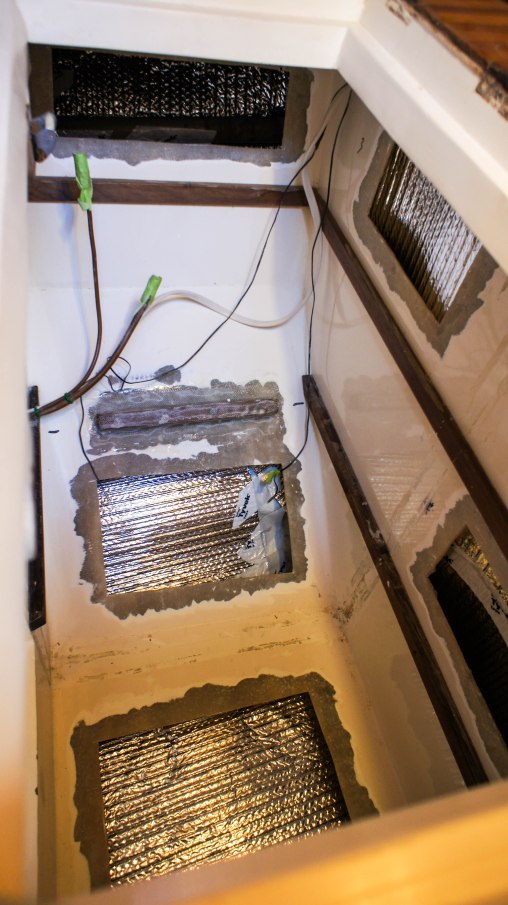 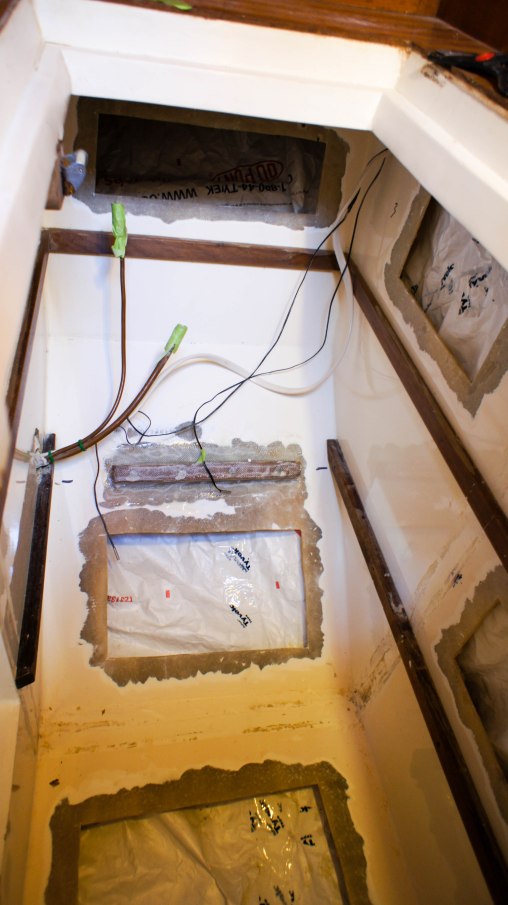 We read over the directions, and by we I mean Michelle read them to me, set up the tanks, hooked up the hoses, got our tips out and cleaned the area up so we had some breathing room. For this job we had to get a full face respirator for me since I was going to be inside this box of chemical reactions. We had organic filters for both mine and her respirators because the fumes are not healthy in the least bit, quite noxious. We did a pre-job walk through of how we would work together, which spaces I would spray first, and when it would be a good stopping point for me to turn around and change the spray tip nozzle. Once we started, there was going to be no stopping until the end. We did indeed start and it was actually kind of fun working with the foam, and really neat watching it expand. Note too, that this foam puts out some mega heat when expanding due to the chemical reaction taking place and is very sticky when not fully expanded and cured. 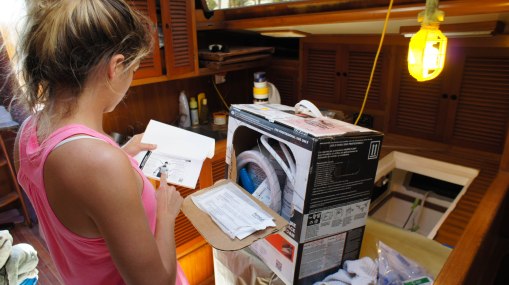 Reading the instructions so we wouldn’t kill ourselves 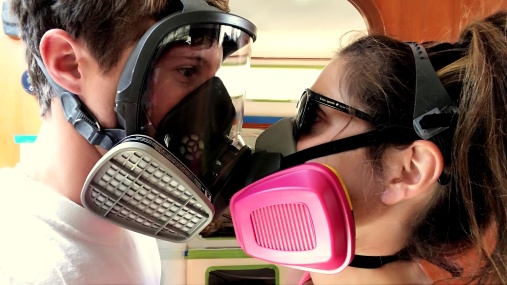 A short video of us spraying the foam, you can see exactly how it works!

All was almost well when we got to the last section: the large space between the hull and the upper part of the freezer. We ran out right at the end as I was working my way inward towards the hole. The gun started spraying liquid that wasn’t expanding, crap! We were left with about a football size void between where the foam stopped and the freezer wall will be. With much thought, we decided to just use the best can of spray foam at Lowes. It’s not closed cell but it will be trapped by closed cell foam and a waterproof fiberglass. There isn’t much else we can do other than ordering another kit of foam and I don’t think its worth the $400 and considering this project is already at least 3x better than what was there. 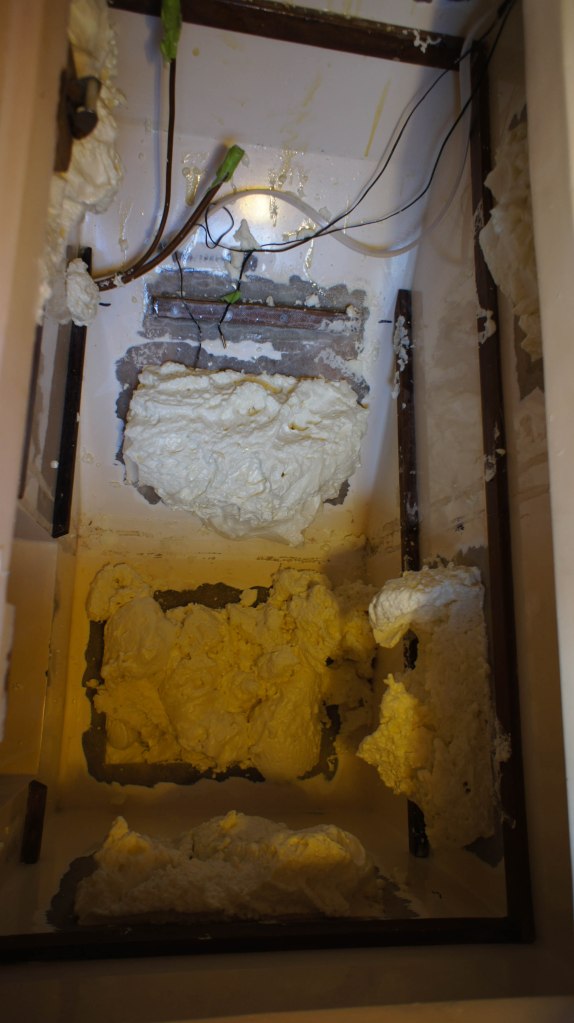 With every space filled with foam, or so we hope, it was time to start putting things back together. Here is where I want to give a huge shout out to our Fein tool, this thing has been a such a blessing and I don’t know why anyone wouldn’t have one on a boat. We literally use it at least twice EVERY project. That said, we cut, shaved, and sanded the foam down to allow the fiberglass cutouts to sit back in flush. I used some 3M spray adhesive to hold the cutouts in place while I glassed them in place. That idea was clutch, thank you!  Glassed in with some West Systems epoxy, finishing cloth, and some expert body positioning and the box was ready to get pretty again. 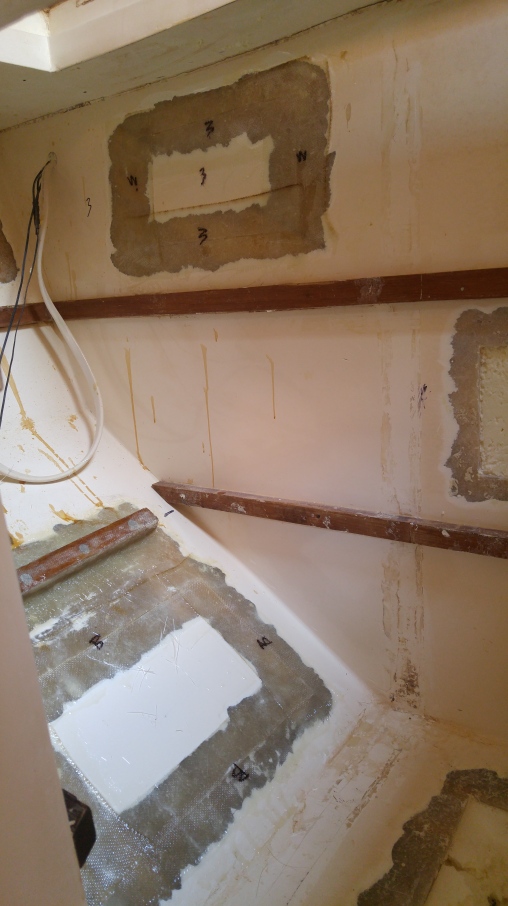 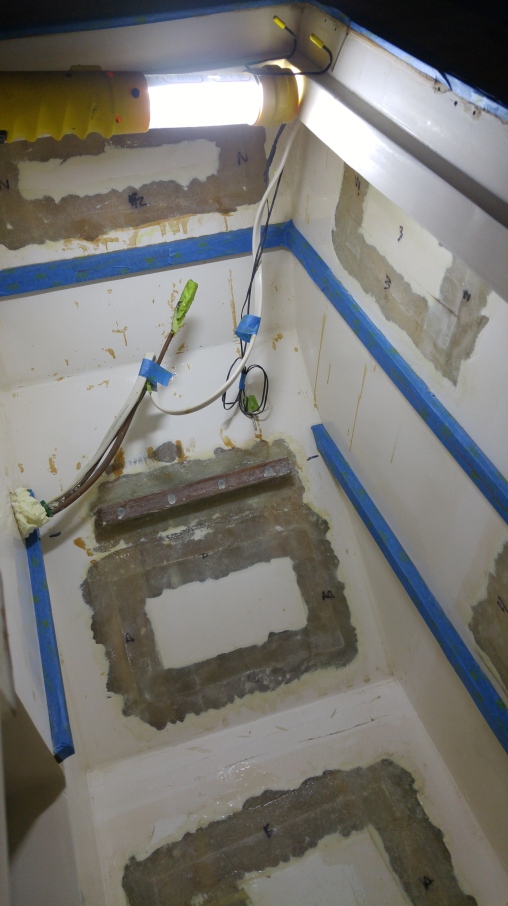 With the help of our nephew Kaille, we had the box sanded, slats to hold the shelves varnished, and the box painted in a couple of days. We decided to forego the typical white paint scheme for a more modern and “colder” color. The icy blue we mixed up not only makes the box nice and clean but it also LOOKS colder! It’s like lifting the lids to the inside of a glacier or opening the door to an iceberg. Cold. Plus, we are pretty sure the color actually drops the temp a couple of degrees… I mean, we’re not scientists so it could just be our imagination.

Right now, it just needs the new spillover divider in the between the two shelves and the gasket we are waiting on for the lids and door. We try will post some consumption and temp figures as we start to use the reefer more in the future. Also, though we haven’t had the system running for long we are hoping the condensation issues are a thing of the past.